Even in the dead of winter a carefree atmosphere lingers through St. Clair Park. Wedged within the lively activity of Downtown Greensburg, the park offers visitors the chance to relax and unwind. In the spring and summer St. Clair Park is known for community events and vibrant activity, but in the heart of this green landscape is a piece of history dating all the way back to the Revolutionary War.

Beyond the metal gate marking the entrance to St. Clair park, a paved walkway winds through the grass. In the early 1800’s the park was a cemetery, providing a final resting ground for a number of people residing in Western Pennsylvania. Visible from either side of the path are a few remaining headstones from St. Clair Park’s hallowed past. One of these graves belongs to a man named Arthur St. Clair, the namesake of St. Clair Park. 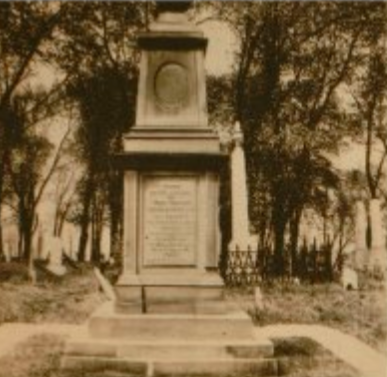 Arthur St. Clair moved to the American colonies from Scotland and found success as a general in the Revolutionary War. He fought for the patriot troops in the Battles of Trenton and Princeton. Quickly, he became commander of Fort Ticonderoga; however, after a disastrous outcome at the battle of Ticonderoga, Arthur was forced to choose a different vocation. In the wake of his military career, Arthur St. Clair represented Pennsylvania in the Confederation Congress. Beneath the rusting canopy of trees, visitors to St. Clair Park have the chance to reflect on the life of Arthur St. Clair and his contributions to Western Pennsylvania.

St. Clair Park is also home to a monument of the namesake of Greensburg. If you follow the narrow brick path diverging left from St. Clair’s paved walkway, you will reach a cluster of headstones that rests on the hill beyond the amphitheater. In the shade of towering oak trees stands a statue of Nathanael Greene for whom Greensburg is named. This monument connects the Greensburg community to the city’s historic past.

At the dawn of the Revolutionary War in 1773 Nathanael Greene left the quaker community in Rhode Island where he was raised, to create a militia group called the Kentish Guards. He fought as a private, gaining experience which led him to become a revolutionary war general at the young age of 34.

This spring, once the winter weather subsides, you can visit St. Clair Park, take a walk among the peaceful lull of nature and witness the remnants of Greensburg’s revolutionary past. Not only that but the Amphitheater, located in St. Clair Park hosts a number of events including the popular SummerSounds Concert Series throughout the summer and the Westmoreland Symphony Orchestra‘s Annual Summer Concert, usually held around the 4th of July,