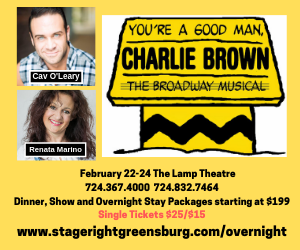 A family-friendly show for all ages, “Charlie Brown” is based on characters created by Charles M. Schulz in his comic strip “Peanuts” with music and lyrics by Clark Gesner. The original “You’re a Good Man, Charlie Brown” (1967) was an acclaimed Off-Broadway and then Broadway production. The show was revised and went back to Broadway in 1999. In this revised version, with additional music and lyrics by Andrew Lippa and dialogue by Michael Mayer, the sweet, joyful innocence of the Peanuts gang is maintained, but a fresh insouciance and playfulness is revealed. The new script features two new songs and the character Sally replaced Peppermint Patty.

In honor of the Charlie Brown lunch room scene Stage Right will give $1 off the purchase of a ticket to anyone who brings a canned good to either the Stage Right office between now and February 22 or the Lamp Box office the days of the performance. All donations will be delivered to the Westmoreland County Food Bank in honor of Karen Piper’s years of service to the Empty Bowl program. 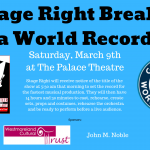