You’ll never get a chance to see Frank Sinatra, or even Frank Sinatra Jr., perform in concert, but some people say that Tony Sands is the next best thing. This show is a must-see for any Sinatra fan! A multimedia extravaganza for the eyes and ears! Tony Sands has incorporated stunning graphics that entice you the moment the stage lights dim, and the music begins. The show starts with Sinatra’s early days with Tommy Dorsey in the bright lights of New York City, and brings us to his comeback at Madison Square Garden, the “Main Event.” Sands will be performing such hits as That’s Life, Come Fly With Me, Luck Be A Lady, My Way, New York New York, and many more. Don’t miss this one of a kind musical tribute to Frank Sinatra. Go to www.tonysands.com 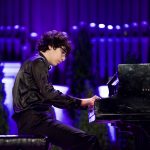