Greensburg Craft Beer Week kicks off this Friday, June 17 and runs through June 25 with over 30 events celebrating craft beer and the greater Greensburg area.

In its 6th year, Greensburg Craft Beer Week (GBGCBW) changed its usual date from September to June in a move to mix up the events and beers.

“After 5 years, we got a bored having it in September,” said director Jessica Hickey. “We really wanted to highlight summer beers and in our area, the breweries really make some killer beers for the season.”

There will be plenty of summer and fruited beers being released during GBGCBW including Yapped, a Peach Milkshake IPA, a collaboration between Yellow Bridge Brewing and Tapped Brick Oven and Pour House, 90 Miles to Cuba, a Key Lime Pie Sour from Invisible Man Brewing and You Can’t Put Pineapple On Pizza a Pineapple Whip Beer from Sobel’s Obscure Brewing

From beer releases, to beer dinners, pairing events and everything in between, there’s over 30 events to attend during the 9 days. (A full list of events can be seen below or click here.)

An exciting new event for 2022 is the Greensburg Craft Beer Festival being held at St. Clair Park on June 18. This 21+ ticketed event will showcase 20 breweries, live music, yard games and more. A limited amount of tickets are still available.

“We’re really excited for the Greensburg Craft Beer Festival,” said Hickey. “The response has been really good and we have some great breweries lined up for everyone to see.”

The festival, which helps kick off the week, highlights breweries from the greater Greensburg area as well as a few other breweries further outside of Greensburg. Josh Jams and The String Theory are set to bring live music and Benvenuti Pizza Factory, Sooo Delicious Kitchen and Hunt Chef will be parked behind the amphitheater for attendees to purchase from.

The annual release of Yellow Bridge Brewing Company’s collaboration with Tapped! This year, they’ve mixed it up and will be releasing a new version of Yapped, a Peaches Milkshake IPA. Learn more.

Marino’s is teaming up with their friends from Helltown Brewing to brew a crushable Pilsner for Greensburg Craft Beer week! Join them June 17th for the beer release and tap takeover. Learn more.

Come try samples of some of your Noble Stein favorites at Mad Scientist! Sampled beers will also be available for sale in the store! Come hang out before the GBCBW Beerfest! Learn more.

Dave Stout will be perfoming live at the Yellow Bridge Brewing Taproom!

Helltown Brewing is taking over all 6 taps at Main Bowling in downtown Greensburg. Book a lane or just stop in. Learn more.

Join Tapped Brick Oven and Pour House along with Noble Stein, Yellow Bridge Brewing, Sobel’s Obscure Brewery and Quinn Brewing for a fun custom pizza night! Each brewery will be creating their own pizza and will be on hand to help make and serve them! Learn more.

Noble Stein will be hanging out at Laurel Highlands Meadery in Greensburg and sharing their Braggot collab, which is a blend of Hired Hand Saison and Apricot Mead. This will also be available starting June 22nd in the Noble Stein taproom. Learn more.

Join Invisible Man Brewing and Purple Elephant Farms for a fun night of beer drinking and plants with Purple Elephant Farms! Grab a beer, Pick a pot, Paint the pot (we have a non painting option as well), Pick a plant to plant. Sooo Delicious will be parked out front for delicious eats and Rock Bottom will be set up with their crystals. Tickets available.

Trivia Night at All Saints

Casually come assemble a jigsaw puzzle or compete as a team to be the fastest to assemble a puzzle all while sampling craft beer from Quinn Brewing. Learn more.

Grab your smartest friends and head to YBB for trivia night starting at 7pm!

We’re hosting a Summer Yappy Hour as part of Greensburg Craft Beer Week! Bring your pup and join us at Petagogy Greensburg on Thursday, June 23 from 5:00 to 7:00 pm to enjoy some local and delicious brews (and special treats for the pups)! Learn more.

Marino’s annual collaboration with 4 Point is BACK for Greensburg Craft Beer Week June 23rd! This fruited sour is packed with Blueberry’s, Raspberries, and Strawberry’s and will be available on tap and in 4 packs to go. Learn more.

Noble Stein will be guest bartending along with others at Oliver’s Pourhouse in Greensburg in support of Big Brother Big Sisters. Come enjoy some beers! Learn more.

Test your knowledge of the MCU during Invisible Man Brewing’s themed trivia night starting at 7pm. They will also be releasing No Rules, their Zero IBU IPA and Hoshi PGH parked out front. Learn more.

As part of Greensburg Craft Beer Week, join Sobel’s Obscure Brewing at their Pop-Up for the release of their newest brew, You Can’t Put Pineapple on Pizza, a Pineapple Whip! Live music from 6-9!  Learn more.

Hang out with us in downtown Greensburg for a little block party with Oliver’s Pourhouse! Food from Oliver’s and Just Roll’d Up and beers from Invisible Man Brewing, Quinn Brewing and more! 4-8pm. Learn more.

Head to The Olde Spitfire Grille for a fun afternoon of corn hole! Sign ups start at 12pm and round robin brackets begin at 2pm. 2 people per team! Learn more.

Why let your kids have all the fun? Build your own car and see how it stacks up against the competition, all while having a nice cold one. There are two classes to choose from. Stock class uses the same rules as the local youth organizations. New this year we have added the Recycled Class. Recycled uses the same rules as the stcok class but you can use a car build in the past (you do not get a car kit as part of your registration). Both classes offer trophies and prizes to the winner. You must be 21+ to race a car due to the nature of the prizes but those under 21 can attend the race. Cars can be picked up at Devout Brewing starting May 20th. Ticket sales benefit Penn Trafford youth. Purchase tickets.

Sunday Smoke Out at All Saints Brewing 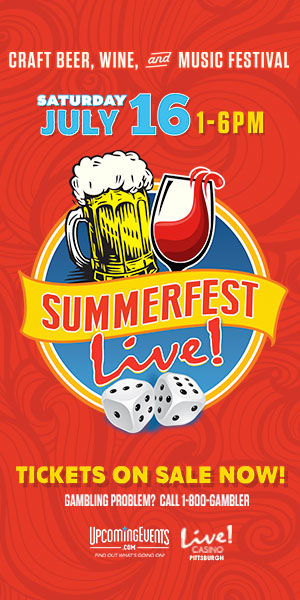